The culverts of June street converged
at a point on the corner where
the rum shop remained closed
until further notice as Belmont approached
the second half of the pandemic year.
Above the evening scene, the frame
expanded into a partnership between
the sky and the northern range
with tinsel lights of a settlement starring
beneath the constellation of a tenement.
I turned and began walking.

First, there was the gap where Mario and Marva
continued their civil feud, each staring judgement,
unprovoked and crude, into the other’s yard.
A spitefulness that marred Marva’s otherwise
good natured lounging on a Morris chair,
robed in a floral housedress, flapping royal
rubber slippers and a hibiscus crown
to buttress her messy bun of hair.
Still house proud since, more than a year
after her death, the family retained
a gardener to tend her prized roses.
Marva arched her lips and ripped a steups,
sucking the living air through clenched teeth.

The street filled the spectral gulf between them,
across which Mario haunted the roughness
of the house he built himself; an assemblage
of purple heart wood, galvanize and fete signs
he repurposed into postmodern designs
installed in the overgrown yard for public view.
An exhibition like the artist’s performance piece
sitting down after striding through the thick weeds
barefoot in black soft pants rolled to his knees,
a white merino, a handkerchief scarf
and minutiae paraphernalia attached with safety pins
to the brim of his cap which he pulled down over his face.
Then adjusting his body to settle on the gallery’s bench,
he leaned back to rest in peace
as darkness encroached on the place.

Moving on, I passed the home for senior citizens.
The residents retired in white wicker chairs
on the verandah and across the lawn,
their vacant eyes drawn towards the street.
As I went by wrinkled arms raised to greet me.
A starch faced nurse moved quietly between
them holding a tray of tea and medicines –
distributed to each with care.
The corners of lips curled into ephemeral smiles.
An antenna perched on the roof was static
except for the caraille vines that bitterly covered it
and which in the uneven evening breeze
received the energy of the wind to transmit
an image of time and the passing age.

A few yards down was a spranger of renown
who earned a name dancing King Sailor mas
and stretching prize money to the last cent.
Then, for the rest of the year he collected bottles,
made whe whe bets, and played wapee to address
any financial care, like the economy size
bottle of Dax for his healthy afro hair.
Mr. Boatswain reclined, chain smoking
a pack of Du Maurier, on the red front steps
that scalloped the facade of his gingerbread house
with doors and windows opened like a pamphlet showcasing
late nineteenth century suburban architecture in Trinidad;
a balustrade brochure on the neighborhood’s origins
that later expanded into a gridiron outlay of
modest homes with galleries, front lawns, small gardens,
eye level brick walls and wrought iron gates.

The elaborate fretwork looked unrepaired
since first mounted. Broken in several places
that recounted weather-beaten years under the tyranny
of the Caribbean’s hurricanes and heat.
Across the stone front walk, bougainvillea wove
through concrete bricks; a barricade supporting
the protocols of the public health ordinance.
Boatswain’s matte, dark-brown face tightened
the lines crossing his forehead and bracketing his lips.
He dragged a burnt-out cigarette mechanically,
supported by the tripod grip of fingers that
withdrew the butt as he blew dense smoke
while raising a clenched fist into the air before
he solemnly declared, “Black lives matter!”

Further down, my eyes reached for the low branches
of a julie mango tree with the first fruits of the season
ripening over a mossy brick wall that negotiated
a diplomacy between the road and a yard,
mediating the social distance of the last months.
Through an imperfect oval opening projected
between leafy boughs was this vignette vision
like a painting framed by a door with warm light
from within and reduced shapes of furniture forming
this detail of a two storey building’s second floor.
A woman emerged stroked in deep-brown tones
guarded by a dog that barked its warning.
For a moment, I noted the line of her silhouette
extending into a coquette shadow cast on the wall
with straight black hair cascading to the banister.
I inhaled desire, then held my breath and her gaze
before cautiously turning away.

In the distance I could see two elderly women
clothed as Shouter Baptists in long white dresses
with peter pan collars and broad waist bands.
They walked in a slow measured pace holding a crocus
market bag evenly in hands and looking
across at each other intermittently. In profiles,
I noted their mouths and noses securely covered.
Madame’s hair was wrapped tightly in a red cloth
the same shade as her fabric mask that caught
the laughter she belted in response to the au courant
overture delivered by Miss Lady whose sacrosanct
witness was received with a steadily nodding head.
Their hips caught the rhythm of her colloquial prose;
a cadence that rose and fell as she coughed complaints
about absentee saints and the rising cost of “simple things”.
I watched them moving further away, growing small
as they approached the junction where a fabled
silk cotton tree grew tall for generations; upwards
and outwards with the names of families and streets.

Stopping on a bridge, between two houses
separated by a broad stagnant drain
that swallowed the pitch lake blackness of the sky,
drowning the dolorous notes of the jumbie bird’s cry,
I inched to the edge and held my breath in vain.
From below came the rotting stench of a bloated dog
floating belly up, gazing wide eyed at the moon,
with maggots strewn around its gaping mouth drooling
yellow bile. I looked at my reflection and waited a while.
On the water’s smooth surface glowed the fireflies’
false indulgence mimicked by the cold incandescence
of the street light flickering and egrets wading through
the chill air. Nearby bits of garbage stayed afloat,
disposed like displaced souls, stuck between sticks sifting
the thick muck blocking the throat of the mock river
that delivered respite as I closed my eyes.

The dry season corresponded in lines of sunlight
through half-opened jalousies
with the purple-heart floor. Anthuriums folded
on the lid of a vase placed mornings before
on the living room table and left,
like all living things, to record the slow time.
A pile of white sheets was attended by my mother
who held each by the seams and in
gestures of a gentle violence lifted her hands
like an evangelical shaking prayer
that mercifully folded the pages of our silence.

Two weeks since quarantine began.
Walking in the yard, I stopped at the spot
where thyme grows into hot vengeful memory
and listened to the sound of the Prime Minister’s voice
on the neighbour’s radio followed by a child’s wail.
I went to the kitchen and stood at the table where
mama pounded medicines in a mortar.
I remembered the heirloom she planted
a year before; the body of an unborn daughter
wrapped up with seeds for the kitchen garden

that now blossomed as a pardon in these dead days.

Amanda T. McIntyre is a Trinidadian author, artist and advocate focusing on cultural studies and literary scholarship. Her work examines Caribbean socio-politics through recollecting and reconceiving mythologies and oral histories. 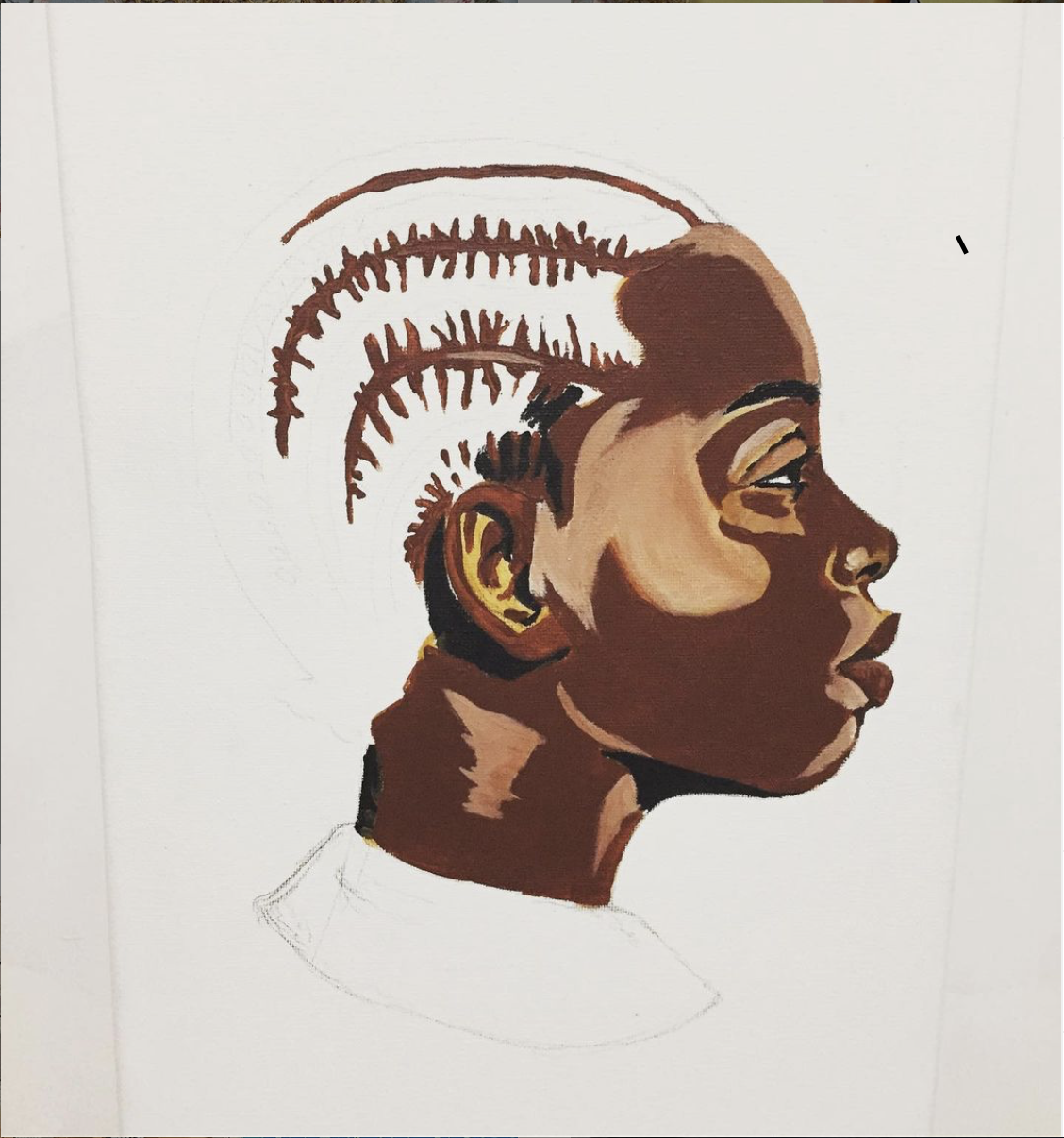 Strategies to Escape the Eyes of the State 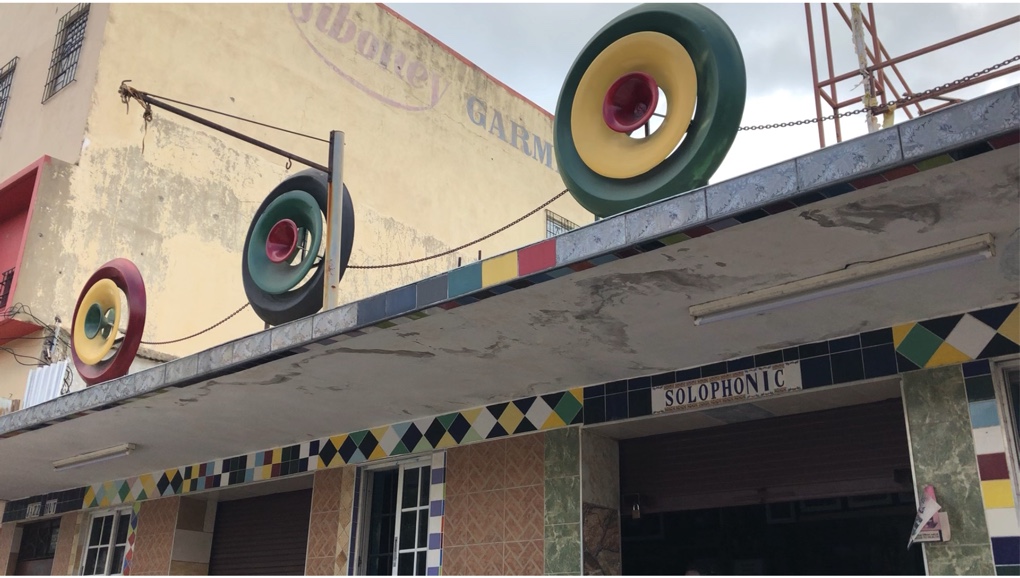